This writer has a confession: I can probably count the number of successful basketball shots I’ve made throughout my lifetime on my fingers and toes. Those few times I have however, I always think, “if only I could do it again just like that.” 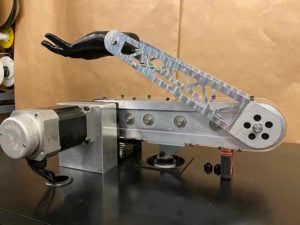 At Penn State Altoona, a group of students created a device that does what I can’t: get the perfect shot every time. For their senior capstone project, Luke Eckenrode, Brad Long, & Anthony Sisak (with the guidance of Professor Jeffrey Moore) took it upon themselves to build a robotic basketball throwing arm that could consistently shoot 15-foot foul shot. The starting height for the arm is based on a 6’7” tall person, the average height of an NBA player, and the hoop is at a regulation height of 10 feet.

Initially, the team built a concept model with the motion solely provided by a pneumatic piston. While the team found some success with this design, it did not provide the precision desired for this machine.

The DPEANIU-040A400 servo drive and other electronics mounted on the device.

In addition, part of the goal of the project was for it to be used as a teaching aid for coaches on how to properly shoot a basketball. The pneumatic design did not allow for the two-link movement of a forearm and upper arm. The students needed an articulated elbow in order to more accurately replicate the human toss motion. For this, they needed a motor driven elbow.

Anthony reached out to ADVANCED Motion Controls in the fall of 2019. Around the same time, another group from Penn State Altoona building a water jet cutter for their capstone project also reached out to AMC. The ADVANCED Motion Controls team responded to both groups, and after some back-and-forth discussing the projects, we agreed to supply several servo drives to the two groups free of charge. We also provided some motors and cabling we had available in our University Outreach inventory.

The robot arm team ended up going with a DPEANIU-040A400 digital servo drive and worked remotely with AMC’s technical support teams to get the servo drive and motor combination working with their LabView controller. 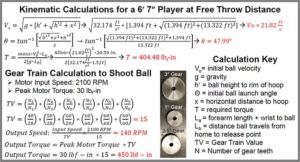 The torque calculations for the throwing arm and gear train.

The team carefully calculated the necessary torque to accomplish the shot. Even with a powerful drive like the DPEANIU-040A400, the motor could not provide enough torque to accelerate the forearm rotation quickly enough. It became evident that a gear train would be necessary. 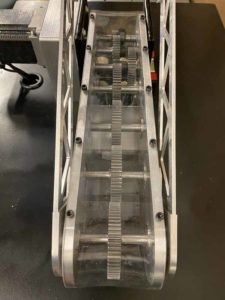 With the advice of the AMC support team, the students worked to design and fabricate an impressive gear box to provide the necessary torque. The gearbox was built directly into the rest of the arm. This section of the arm used a linear actuator to provide its upward momentum.

To hold the ball, rather than use a simple spoon-shaped design, the team 3D-printed a model of a human hand, again to more precisely reflect the actual human throw. 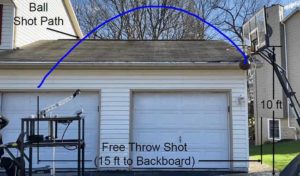 While the robot arm is optimized and tuned for 15’ free throw shots by a 6’7” player, the LabView program the students generated allowed for different heights and distances. The LabView program also uses feedback from a laser to more precisely measure the distance from the hoop to account for small variations in distance from the input parameters.

Even with the COVID-19 pandemic disrupting regular schooling in March of 2020, the robotic basketball arm team managed to complete their project and present it over Zoom on May 1st.

Their testing showed a shot success rate of over 90%, far better than I could even dream of.