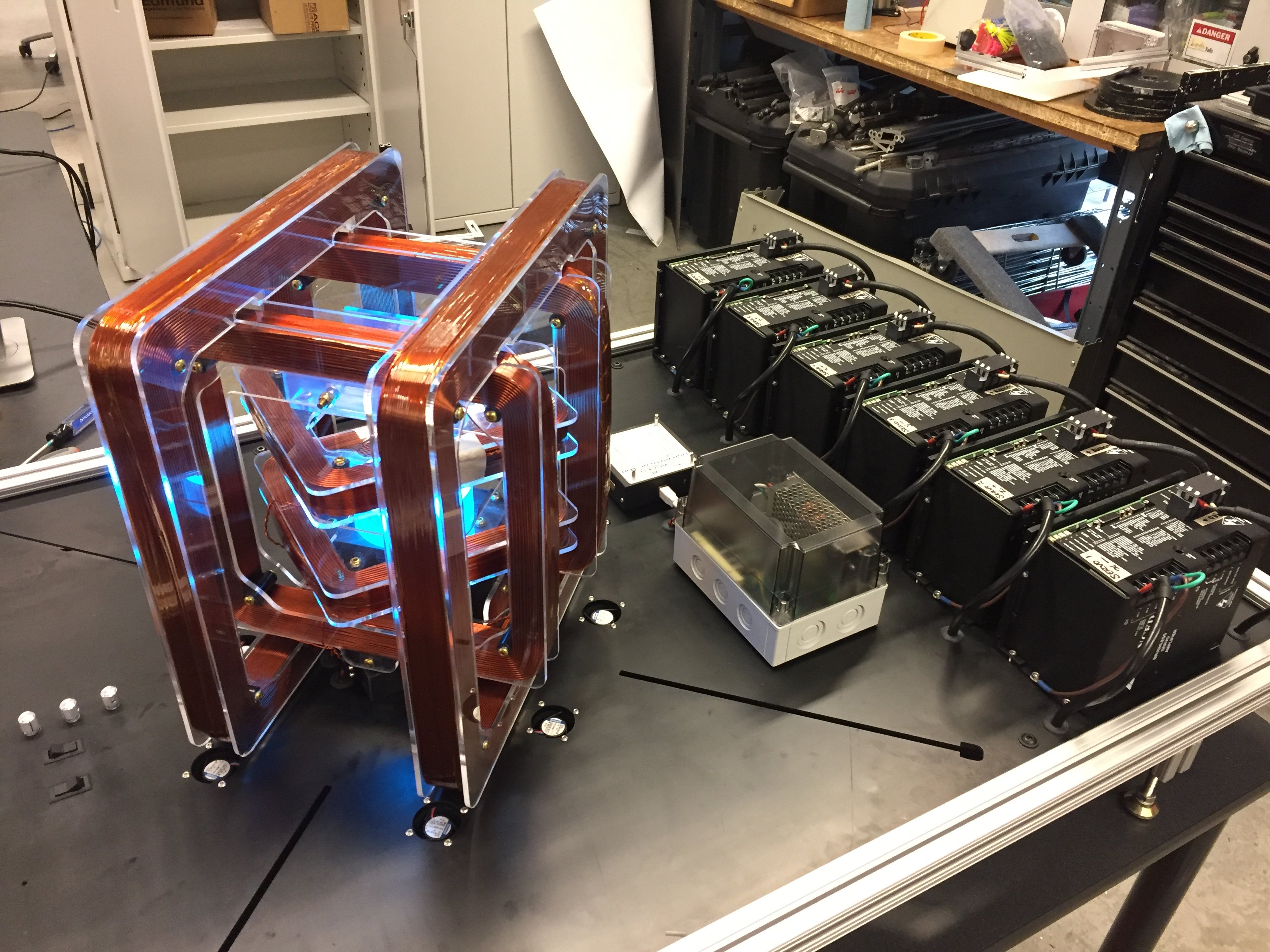 The Helmholtz coils with the six B30A40AC servo drives

The Triaxial Helmholtz Coil project by Samuel Osterhout from the Colorado School of Mines demonstrates and explores the physics that build the foundation of motion control technology.

Our servo drives are key elements in very complex motion control systems. In the most isolated context, our products regulate current and voltage through wires based on command and feedback signals. The wires are spun into coils in servo motors, where the current flowing through them creates the magnetic field and allows rotary motion. This manipulation of magnetic fields through coiled wires is the key to motors and motion control technology. So, let’s strip away the motor shafts and housings and focus on the coils and the current running through them.

Hermann von Helmholtz first developed what would later be known as “Helmholtz coils” in 1849. Helmholtz found that aligning two identical coils concentrically with current flowing through them in the same direction creates a uniform magnetic field between them. This technology has since been used primarily for calibrating magnetic instruments. 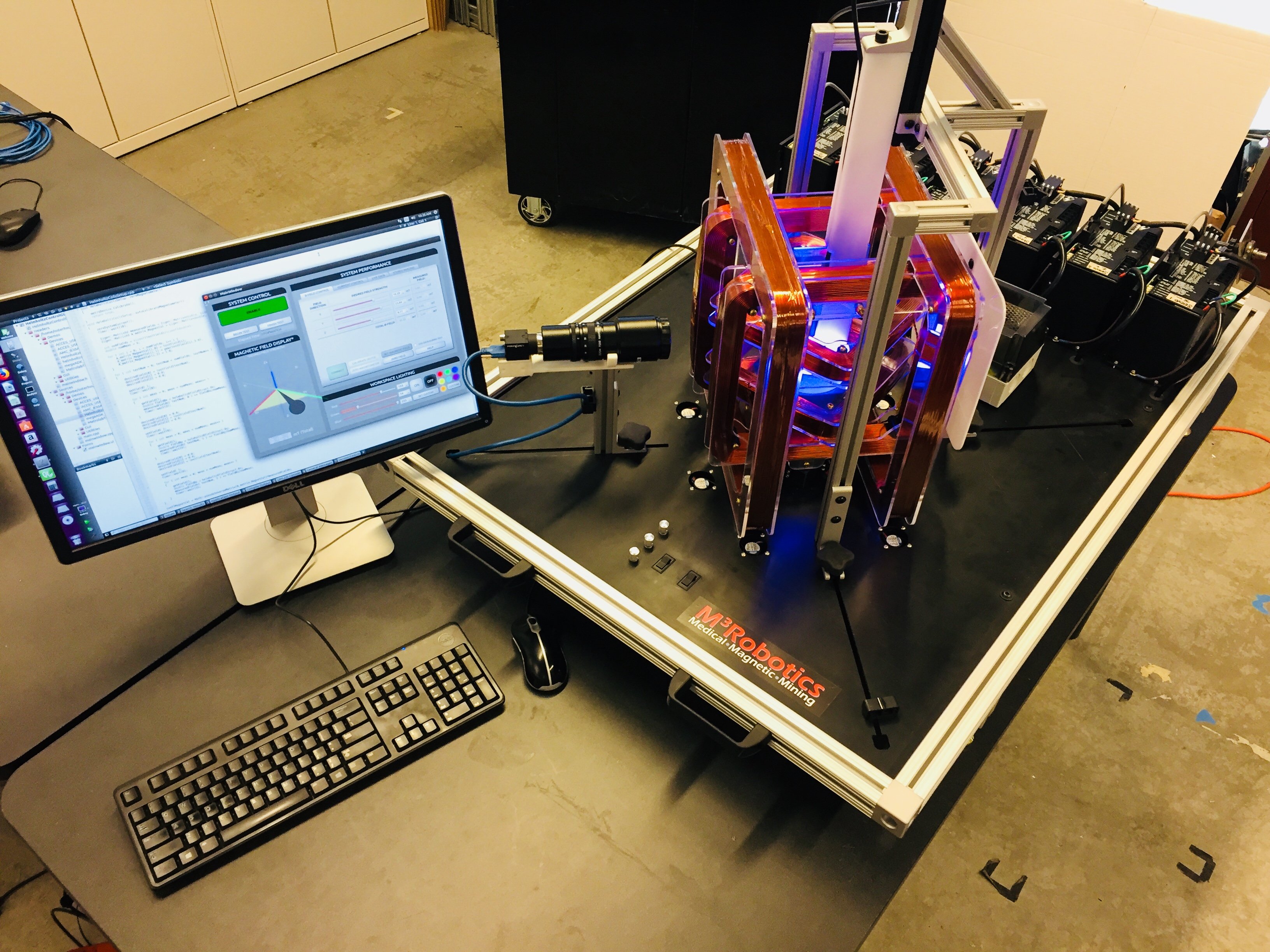 The entire Triaxial Helmholtz Coil System with the computer interface

Intrigued by the other potential applications of Helmholtz coils, Samuel Osterhout decided to develop a controlled system of them as his thesis for his master’s degree in mechanical engineering. Unlike Helmholtz’s original coils, Osterhout’s project had the coils aligned in in three perpendicular axes. With two coils per axis, there were six coils in total.

Each coil was powered via an ADVANCED Motion controls B30A40AC servo drive, one of our higher power analog servo drives.

With these coils together, Samuel could produce a magnetic field within the space in any direction and use it to move a magnetic object. The magnetic object was tracked through the space in real time using two cameras, and a computer controller would update the signals sent to the drives to achieve the desired response. Our drives did what they always do: send current through coiled wires. 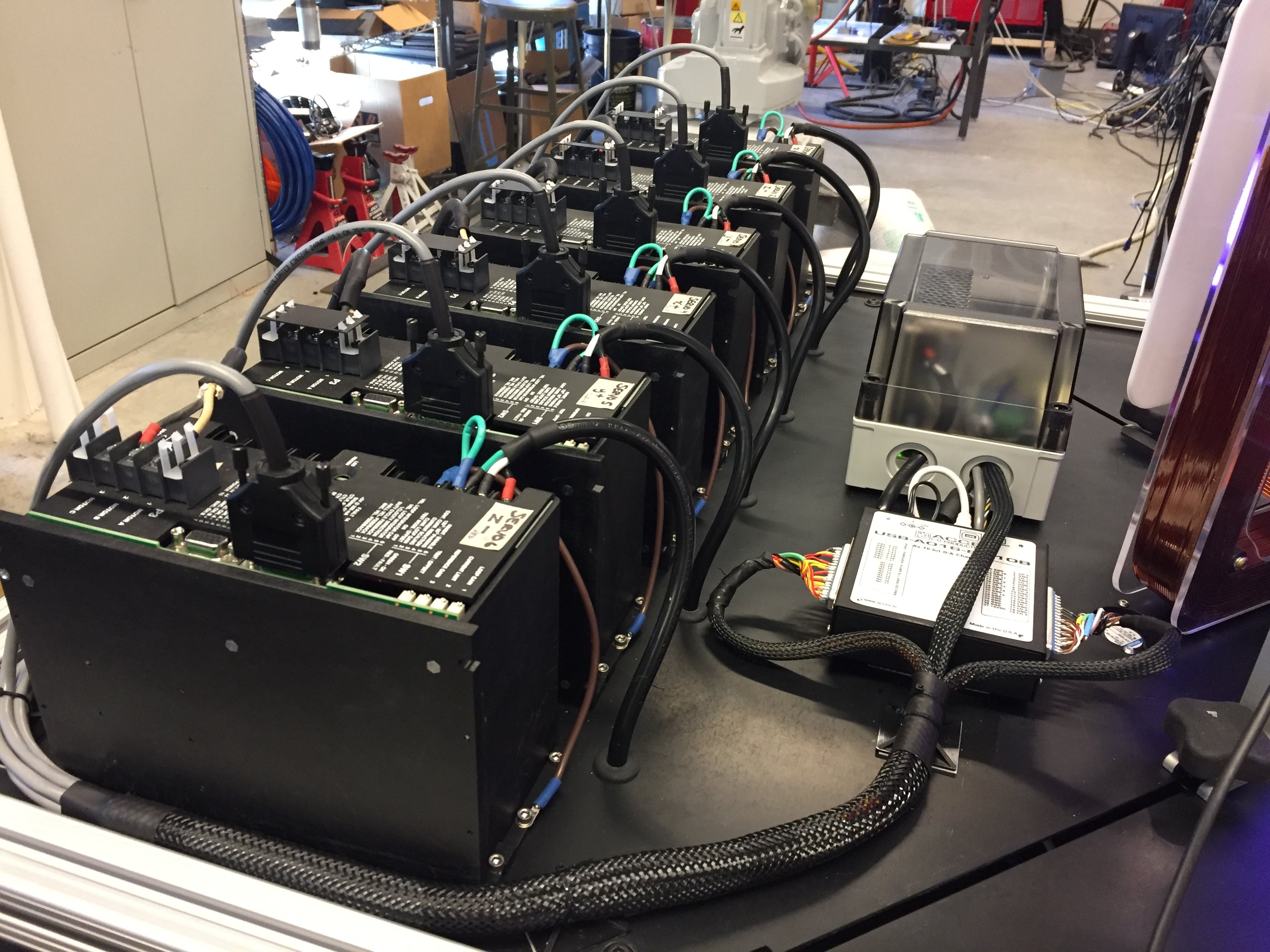 The analog servo drives all carefully wired to the system

This project was ambitious but beautifully crafted. The whole system, servo drives and all, was mounted into a short, wide metal frame with a base. Copper wires were wound in rectangular acrylic frames that fit into each other. LEDs illuminated the central area with a full spectrum of color options available. Small fans were installed to keep the coils and the surrounding structures from overheating. A three-axis hall magnetometer was used to evaluate the system’s performance throughout testing.

Osterhout’s triaxial system opens the door to a world of possibilities for Helmholtz coil applications, particularly in the biomedical industry. Navigating small devices, such as dispenser capsules, throughout the human body without the need for motors can be much safer and less invasive to the patient. 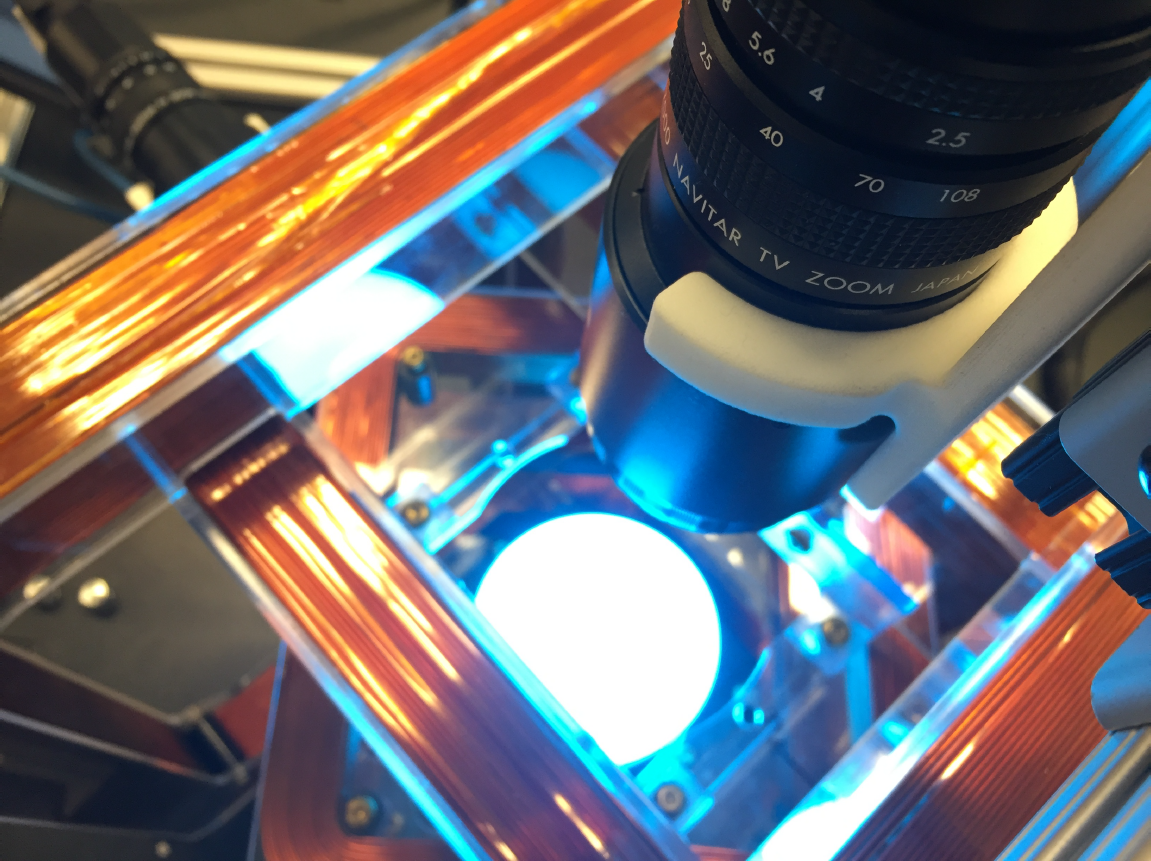 The cameras mounted to face the space within the coils.

In addition, this technology could be used for assembly purposes, moving components into spaces that would be unreachable with regular tooling. It all comes down to creative use of the physics that make motors and motion control technology. This project truly captures the creativity necessary for innovation in this field.

“The AMC-B30A40AC is a robust, dependable servo amplifier which matches and exceeds its advertised performance specifications. The electronics are built with quality components, and the servo housing is thoughtfully designed and well labeled. Finally, installation, setup, and maintenance has been a breeze with the help of A-M-C’s comprehensive manuals, and fantastic customer service! If I ever need motion-control-related devices in the future, A-M-C will be the first place I look!”
– Samuel Osterhout