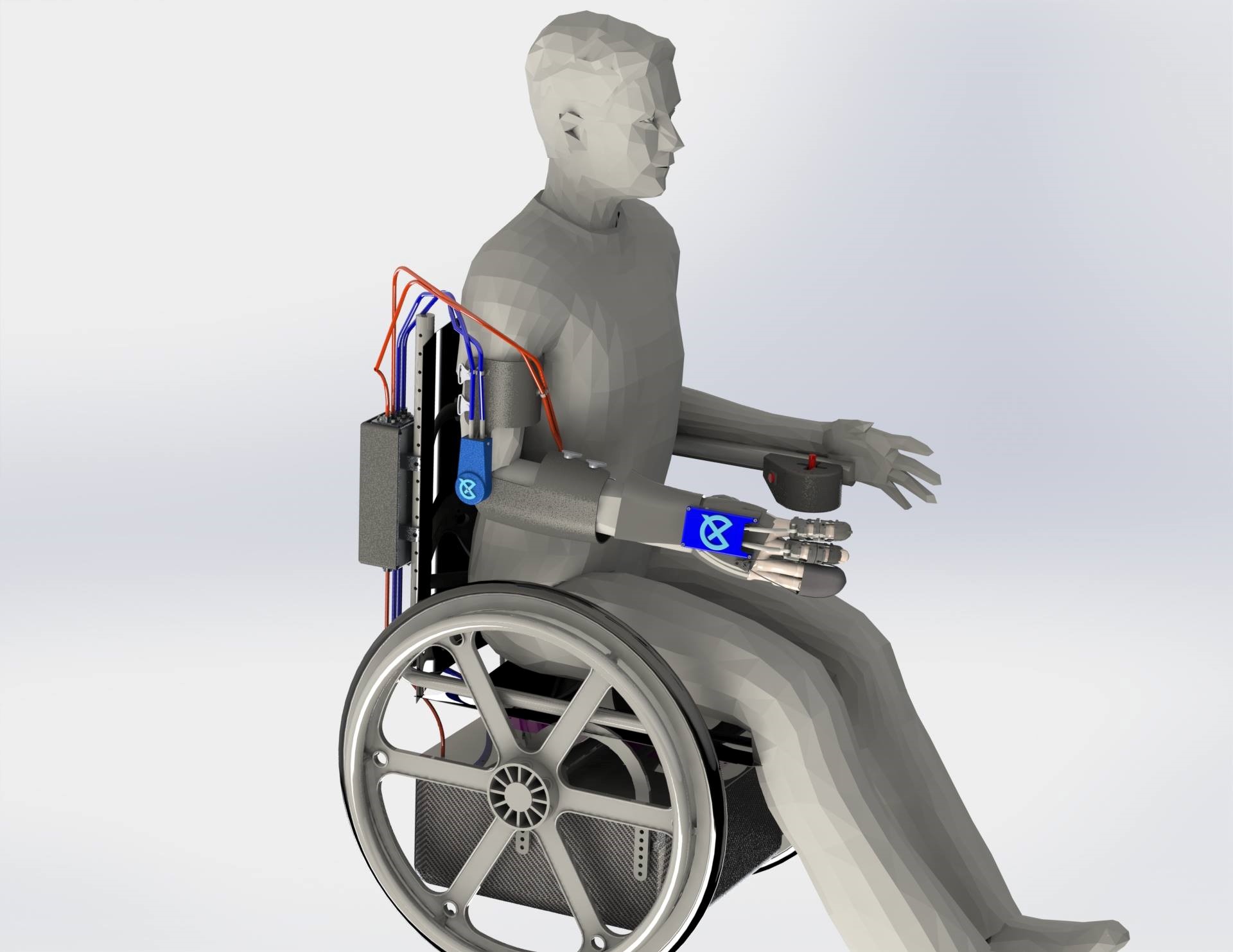 Model of the ExodUS unit mounted on a wheel chair.

Some of the greatest heroes are those who step up in times of tragedy. In August of 2015, Didier Prince from the Université de Sherbrooke was surfing when the waves sent him tumbling violently through the water to the seabed, fracturing his fifth and sixth vertebrae on impact. This resulted in a spinal cord injury (SCI) that will never fully heal, leaving Didier as a quadriplegic. Through months of rehabilitation, Didier has regained full control of his head, shoulders, and biceps and partial control of his upper back muscles and pectorals, though he won’t be able to use his triceps, hands, or legs again.

What Didier says he misses the most is the ability to do simple things on his own, such as drinking from a glass, eating with utensils, and writing with a pencil. During their fourth year at the Université de Sherbrooke, eight mechanical engineering undergraduate students formed a team called ExodUS with the goal of returning some of that personal autonomy to Didier. The team knew going in that the scope of the project would go several months beyond the conclusion of their fourth and final academic year, but they were determined to make a difference. 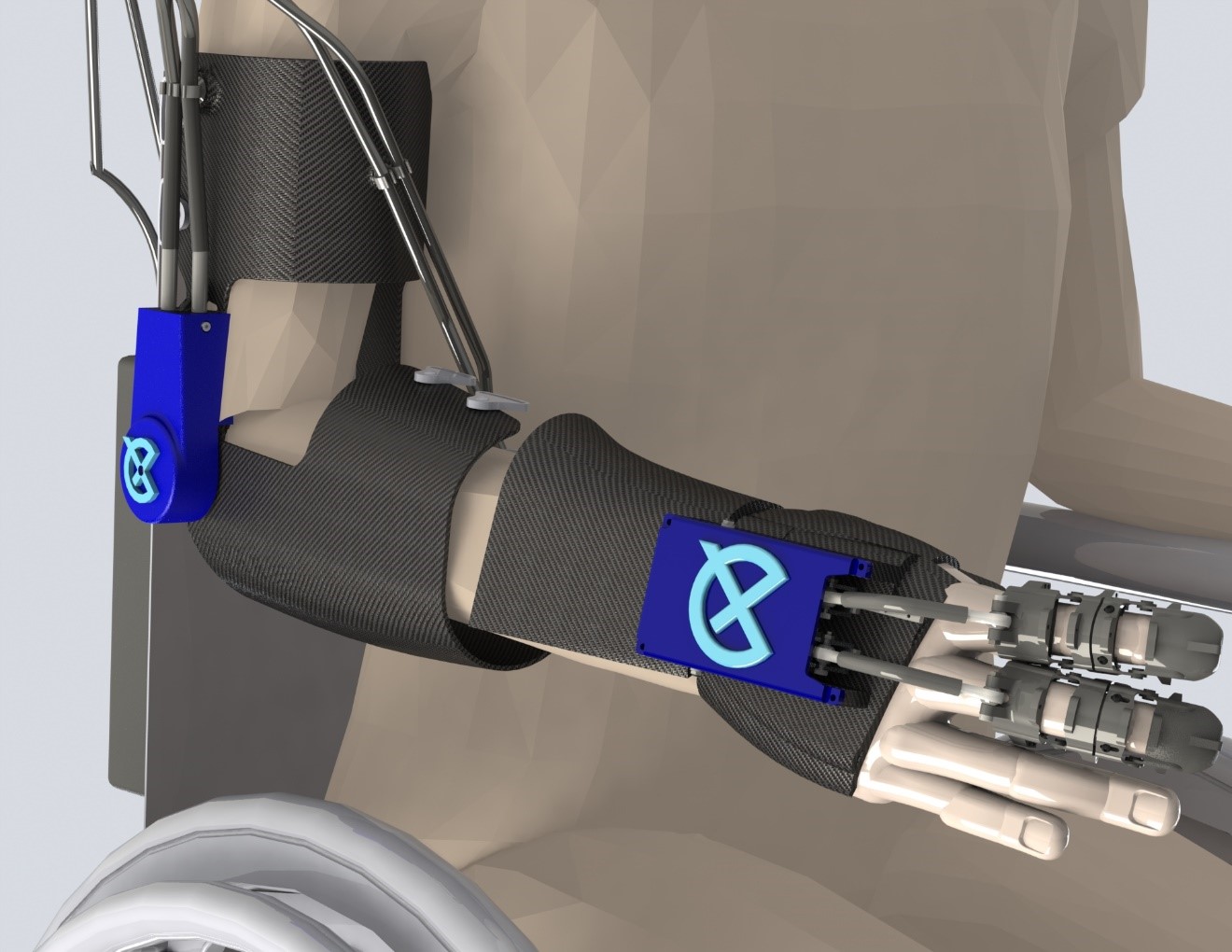 Model of the exoskeletal arm.

The team set out to design an upper-body exoskeleton that would assist in extending the user’s arm and facilitate grasping tools, glasses, and other objects. The power unit and electronics would be mounted to an electric wheel chair. For several of the electronic components, however, the team needed to look beyond the university.

In the early spring on 2017, ExodUS team member Jonathan Plante contacted AMC hoping to purchase a DZRALTE-020L080 servo drive, mounting card, and a motor from the University Outreach free drives shelf. Karl Meir from AMC recognized that the mounting cards available for free were not compatible with the drive that they specified, so he instead offered a different mounting card from AMC’s regular stock free of charge. 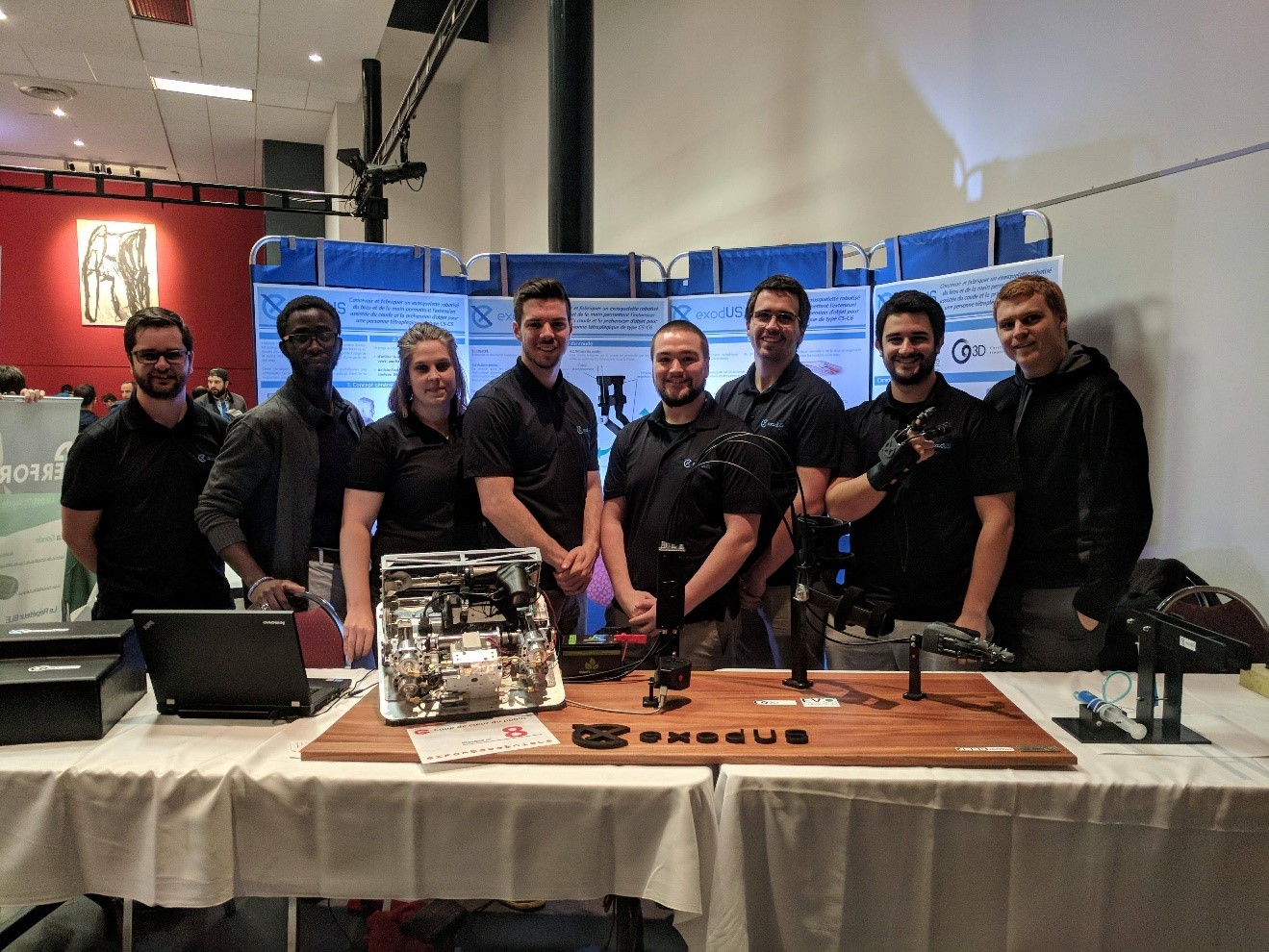 The ExodUS team at the MégaGÉNIALE expo.

The first prototype was presented at the annual MégaGÉNIALE expo in December 2017. This prototype, while an impressive proof of concept, was still not yet suitable for actual use by Didier or other SCI patients. However, the team is hopeful that future students will build upon their work and that the attention their project attracted will encourage further research in this field. Thousands of spinal cord injuries occur every year, and projects like ExodUS offer a glimmer of hope for a better future for those affected.

All of us at ADVANCED Motion Controls would like to recognize the eight students that made up the ExodUS team: Jonathan Plante, Alexandre St-Jean, Hugo Lussier-Carrière, Phillippe St-Louis, Dominik Thibault, Joey Cloutier, Marie-Pier Gaudet, Andrew Bouthillier-Martineau. 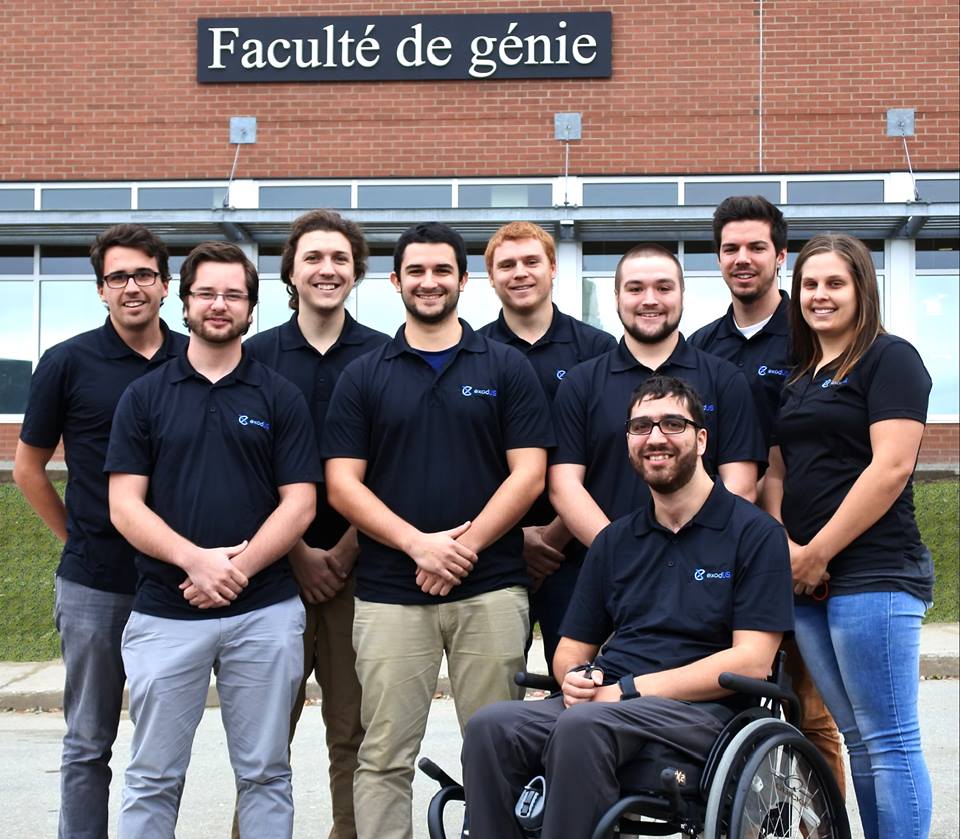 The ExodUS team with Didier Prince.We are humbled by their selfless and heroic efforts, and we are proud to have been their servo drive supplier.

We are truly humbled by their selfless and heroic efforts and proud to have been their servo drive supplier.

ADVANCED Motion Controls continues to maintain our relationship with the Université de Sherbrooke. Recently, AMC donated a dozen 20A14 servo drives to the university for a project team developing two collaborative robot arms that circumvents the high costs of using harmonic drives. We look forward to seeing where this project goes as well.

“We have been using your drives for 10 years with great success and have nothing but positive comments. Robustness, ease of use (key in an academic environment), and they deliver their technical specifications. Great products!” – Dr. Jean-Sébastien Plante