Imagine being able to achieve the same amount of power output and performance from your servo powered device, at a fraction of the cost. Just as PC manufacturers have created smaller computer chips each year with faster speeds, so too has the printed circuit board (PCB) mounted servo drive been able to offer the same performance as panel mount servo drives at a fraction of the cost and size.

Traditionally, panel mount servo drives were housed in metal cases and installed into electrical panels which took up lots of space in the machine. Embedded servo drives greatly reduce the space required to operate by plugging directly into your PCB and eliminating the need for metal housing and connectors. PCB mounted servo drives can either be constructed using detachable connections or soldering.

The space saving capabilities of PCB mount drives allows room for additional components in the machine to make it more functional and capable, or to make the machine smaller and lighter if desired. For this reason, PCB mounted servo drives have become huge in the automation and robotics industries.

With reduced wiring and system complexity, PCB mount drives are less expensive yet offer the same performance as their panel mount equivalents. Commissioning and servicing costs are also reduced due to their ease of installation. 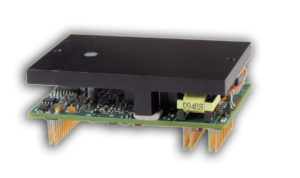 Owed to their simple and space-saving design, PCB mount drives take up a fraction of the volume of panel mount servo drives. A smaller footprint gives designers increased flexibility when they laying out components as well as reduces the overall machine size and weight. PCB mount drives can be mounted closer to the motors in places where a panel mount drive would never fit, such as directly into a robot arm. The lightweight and compact design of PCB mount servos make them perfectly suitable for almost any application that requires tight integration.

Even though they’re smaller and less expensive than panel mount drives, PCB mount drives don’t sacrifice on power output and performance. PCB mount drives can output 60A peak and 30A continuous while taking up less than 39 cm^2 of board space! Furthermore, with newer designs the power density can be doubled. 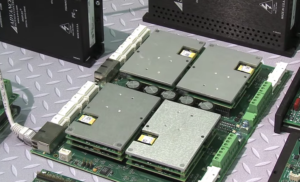 Many designers choose open designs that allow for quick plug-and-play mounting. For multi-axis systems, PCBs can be designed to accept multiple single-axis drives. PCBs can also be designed to accept mating connectors that are compatible with your motor manufacturer’s standard cables, thus reducing cabling costs and increasing reliability. With a well thought out PCB design it can make it easier to install your PCB mounted drives and connect the controller, feedback, and motors.

Our large selection of PCB mount servo drives gives customers the flexibility to find the model that matches their needs and avoid paying for features that they won’t use. Customers who design their own PCBs can place the drives and mating connectors in the locations that work best for them.

Power Density is defined as how much power the servo drive can output divided by how much volume the servo drive occupies (Power Density = P/V). PCB mount servo drives have some of the highest power densities available and they are getting even smaller and more powerful. The limiting factors for power density are heat dissipation and connectorization. Improved power devices can operate more efficiently which allows them to produce less heat while the plug-in style connectors greatly reduce the amount of area that traditional connectors would take up.

Why Select PCB Mount Servo Drives For Your Next Project? 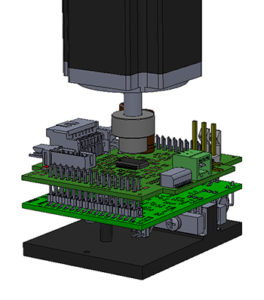 PCB mounted servos offer much of the same characteristics as panel mount servos at nearly half of the price and size. Don’t think that this limits their ability to work as well as panel mount products. Whether you’re working with a brushed or brushless motor, we have standard PCB servo models that will operate with your motor.