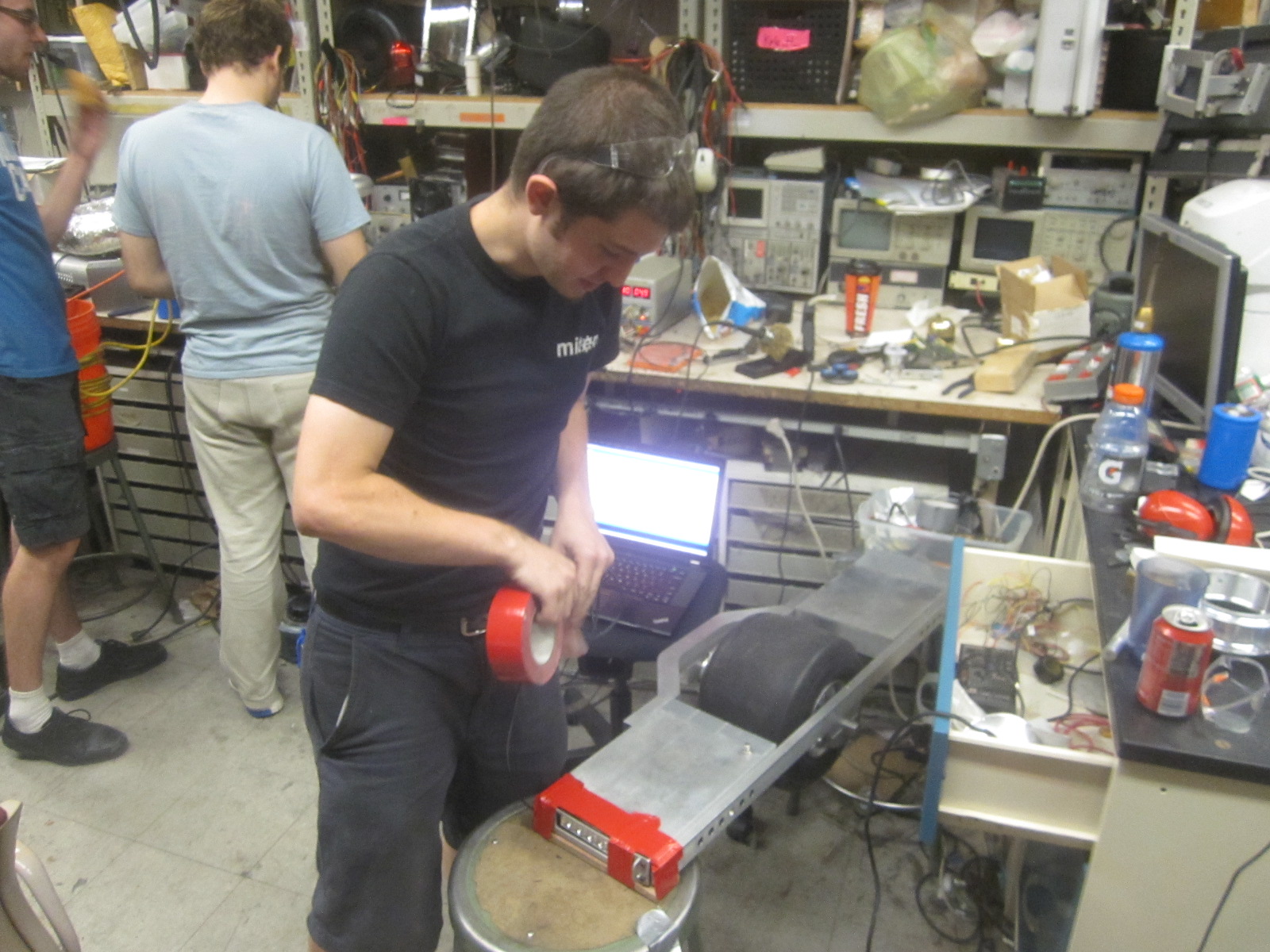 Kouttron makes adjustments to the Nimbus.

One man’s trash is another man’s future self-balancing skateboard. After stumbling upon a collection of aluminum scrap around the MIT shops and visualizing a skateboard that he could actually ride, Dane Kouttron began developing the Flying Nimbus. Named after a rideable cloud from the Japanese anime series Dragon Ball Z, the Flying Nimbus is a single-wheeled device that is both self-powered and self-balancing, creating a smooth ride for the user. Developed in the summer of 2014 Kouttron’s single-wheeled device preceded the two-wheeled “hoverboard,” which debuted and rose to popularity in 2015.

A one-wheeled skateboard might initially appear like the latest and greatest way to break your leg, but Kouttron had safety in mind from the beginning. The initial design goals called for anyone to be able to ride the Flying Nimbus safely without any significant training. A relatively simply-coded control loop maintains the balancing based on the angle of the frame, which is measured using an accelerometer and a rate-gyro. The response of the motor balances the board, and keeps the user level. Of course, this balancing act can cause the wheel to turn, so the user can get the board moving forward or backward with a simple sustained lean.

Despite all his ingenuity, Kouttron was regularly facing issues with the motor control. Specifically, the servo drive he was using kept faulting and overheating during the motor tests, even with fans and ventilation in the board’s frame. In August 2014, he contacted ADVANCED Motion Controls seeking a drive that would be able to handle the workload and stay cool enough. 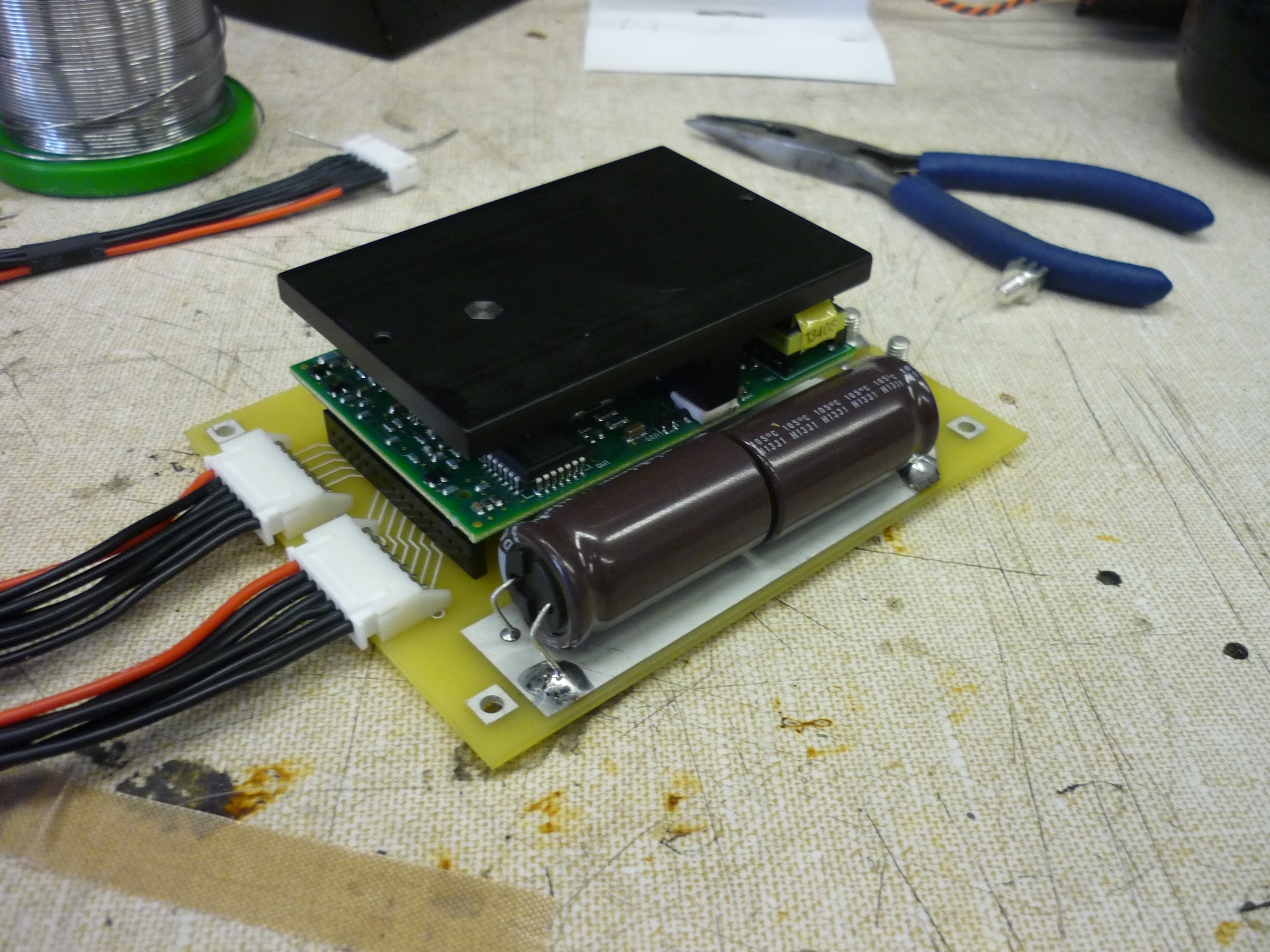 The AZB60A8 ready to be installed.

René Ymzon at AMC recommended the AZB60A8, a compact PCB mount servo drive with a cross sectional area less than that of a credit card yet capable of over 2 kW peak power. Already fascinated with the project, AMC decided to donate the drive to Kouttron completely free of charge. Kouttron was easily able to make his own mounting card for the servo drive that fit in the chassis. Once the new drive was installed and working, the rest of the project could continue. 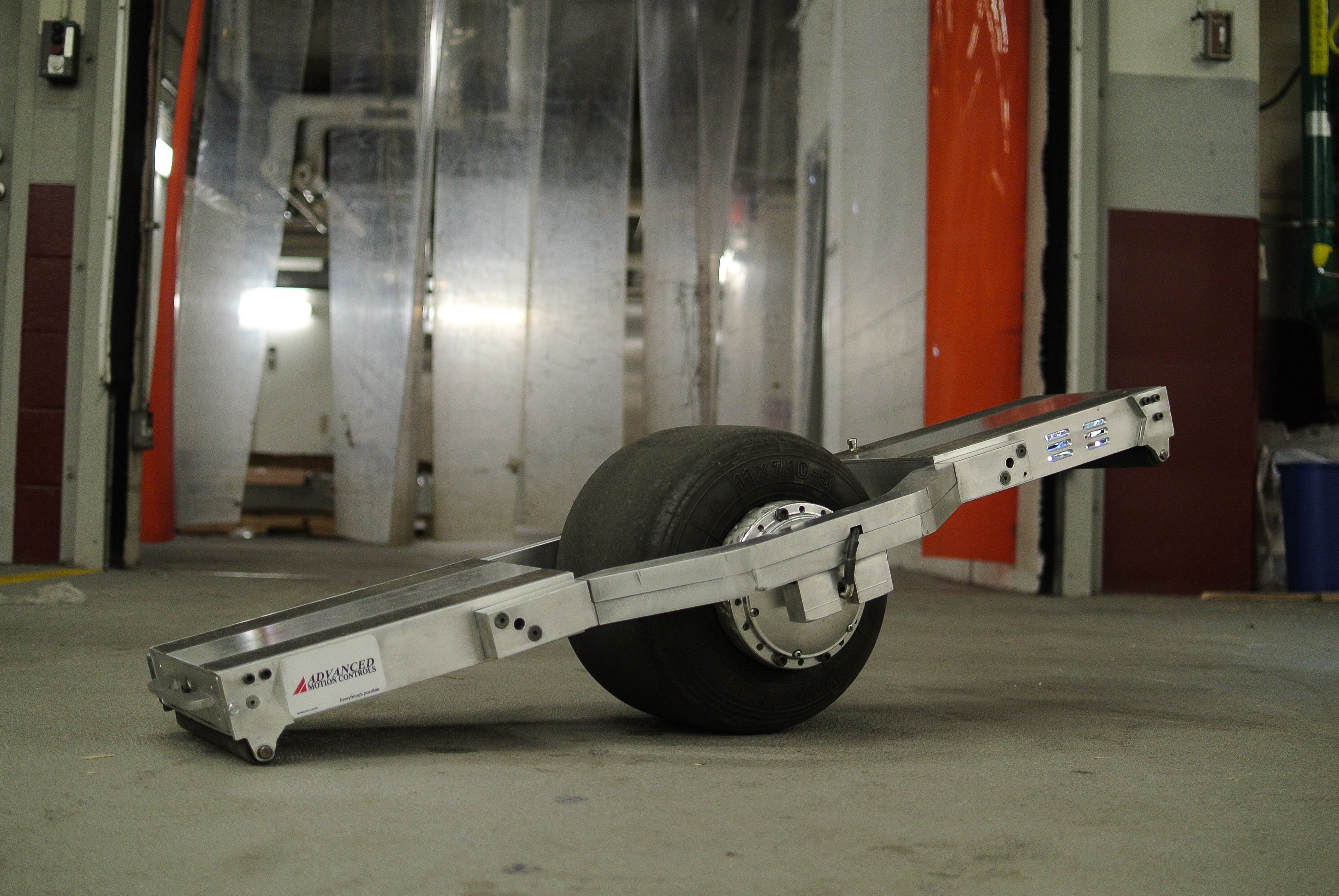 For additional safety, Kouttron made sure that the board had a dead man’s switch. This came in the form of an electric guitar stomp button installed in the top of the frame. With this switch, the Nimbus will only operate if the user has their foot on the button, thereby preventing runaways and making dismounting easier. To make the board safe to ride at night, Kouttron fitted the front end with a bright LED module, which could be turned on and off by tilting the board 90 degrees while it wasn’t accelerating. After some final tweaks to the frame and the addition of battery packs and grip tape, the Flying Nimbus was ready for full testing. 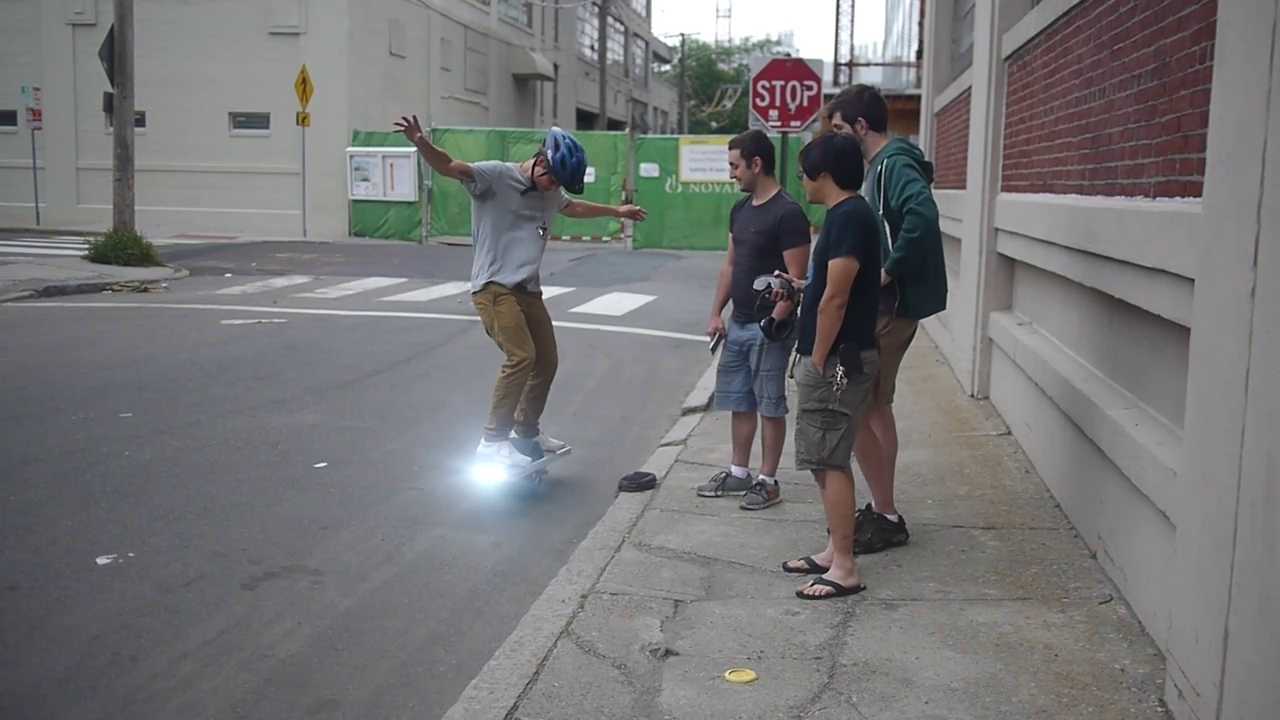 The Nimbus is tested with friends.

After some tuning of the control loop, Kouttron and his friends were able to work the board easily. Ironically, the people who had the most difficulty with the Nimbus were those who had experience skateboarding, who often tried to do the balancing themselves instead of letting the board do it for them. 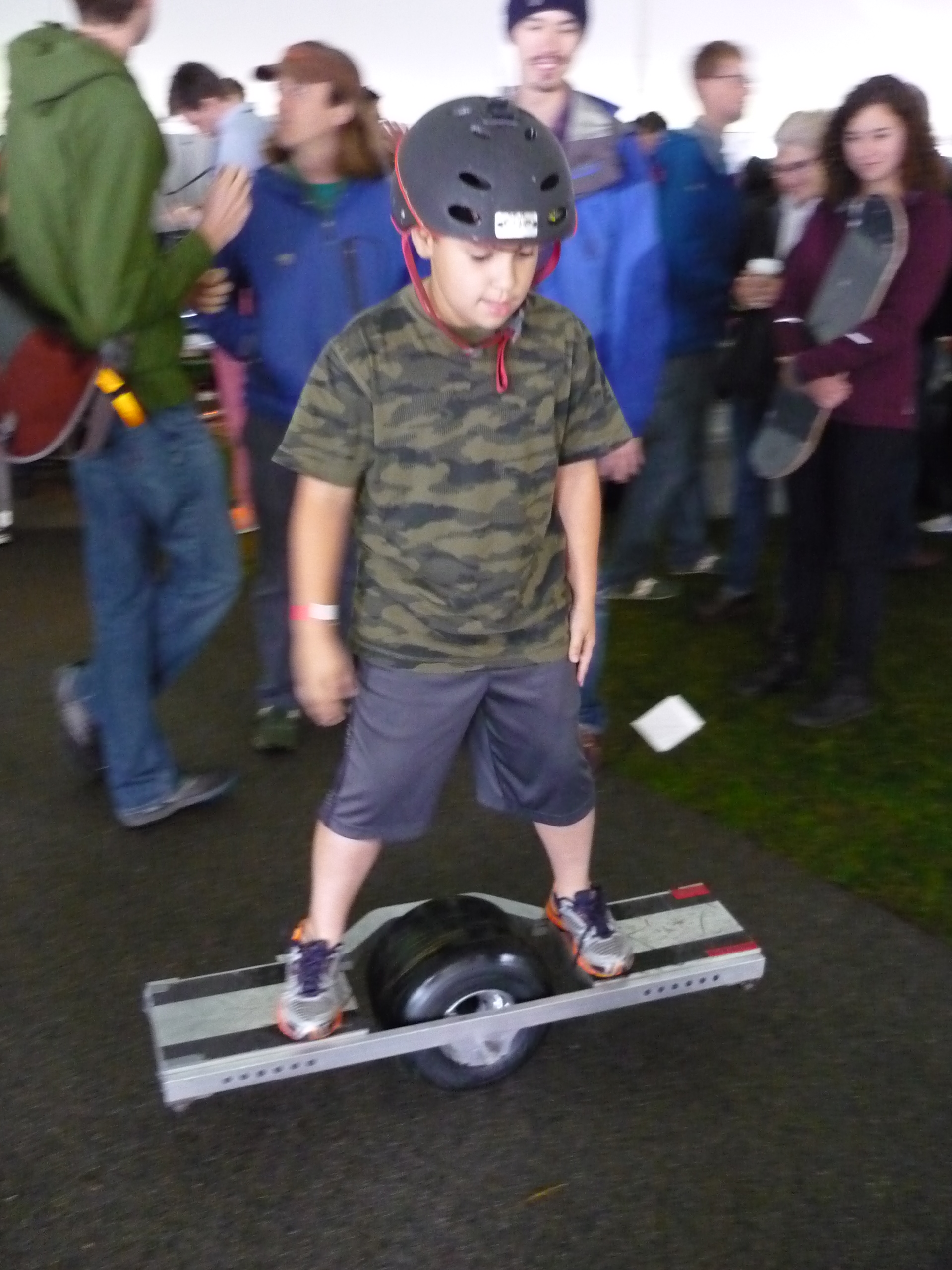 Participant at the 2014 Makerfaire.

Kouttron’s Flying Nimbus was a hit at the 2014 Makerfaires in New York City and at MIT. Dozens of individuals tried it out. Despite a few dings and general wear, the board performed smoothly throughout both events without any motor failures or injured participants. Since then he’s further upgraded the device, including improving the gear mechanism, strengthening the wheel support, and adding red LED strips for taillights. He continues to work on various personal projects, reminding us of that even an old pile of junk can become something amazing with a little creativity, a reasonable time commitment, and a few quality components. 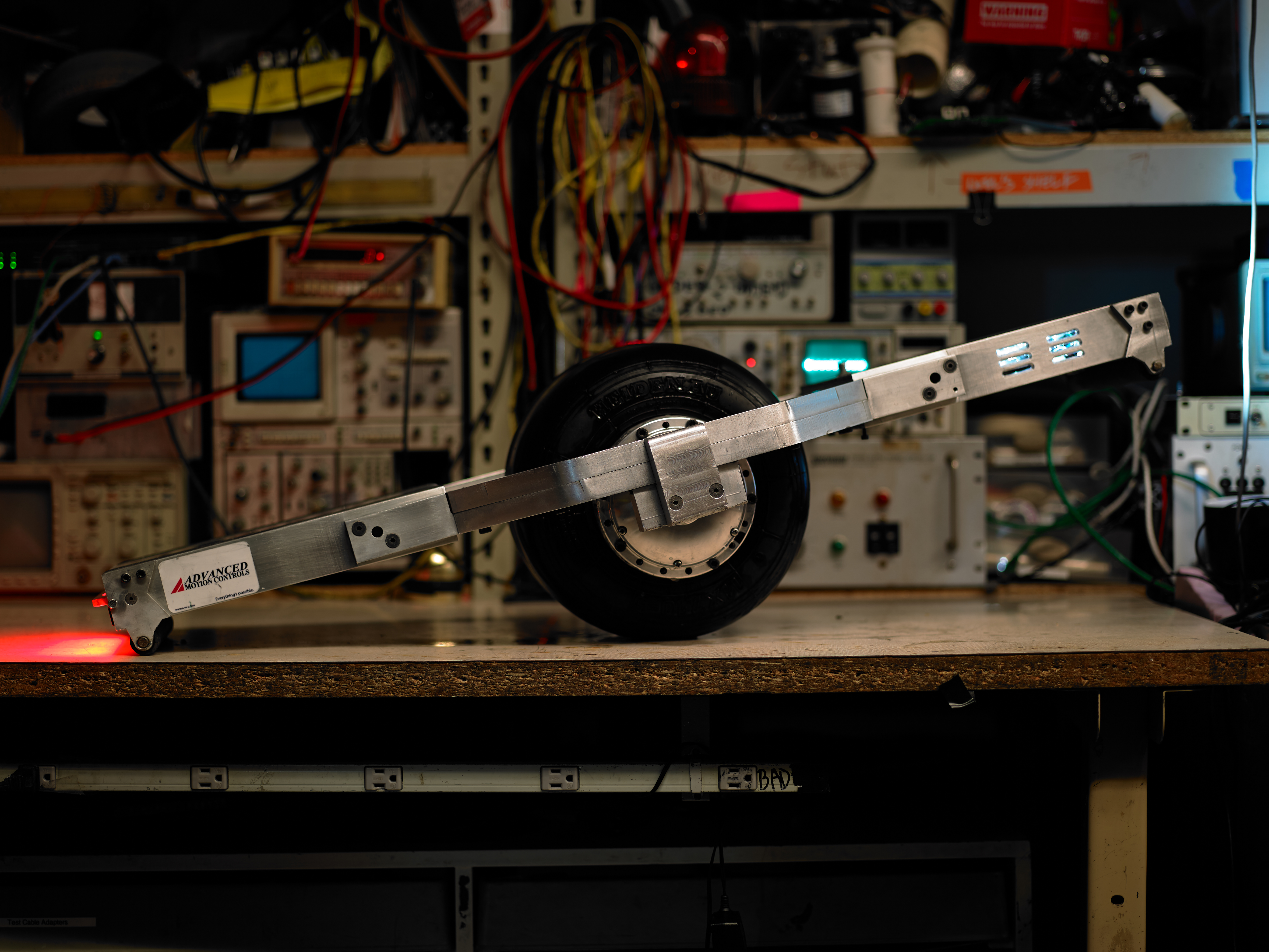 The Flying Nimbus with taillights.

“AMC saved the day on this build, donating an AZB60A8 three-phase servo drive. It preformed phenomenially, even with some interesting riders, smashing between forward and reverse and bouncing all around. Not only did it survive the electrical loading, the shock-and-vibe from this application is enormous! Give one of their drives a whirl, they are fantastic. Thanks again A-M-C!”
– Dane Kouttron

Read more about the Flying Nimbus and Dane Kouttron’s other projects!

The Flying Nimbus in action: